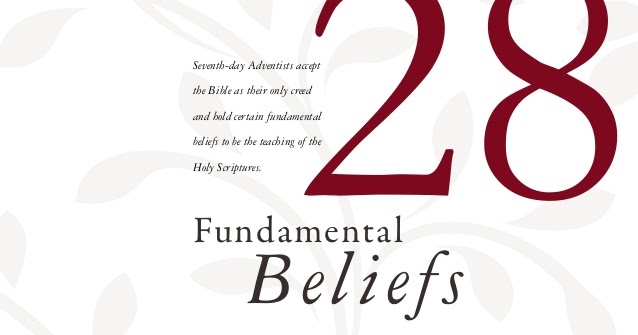 Do I have to believe in all of the 28 Fundamental beliefs to become a Seventh-day Adventist Christian?

It is important to make the distinction between the official teachings of the Seventh-day Adventist church as recognized by the General Conference and test of fellowship that is required by new believers when they are baptized into the church. By becoming a member, a person is stating that they understand the 28 fundamental beliefs and are willing to live and worship in harmony with Seventh-day Adventists who hold to these beliefs.

The only real test of fellowship is that the member acknowledges the fundamental beliefs in principle and refuses to be in open opposition against those who hold to the basic teachings of the church.

The church recognizes a member’s personal choice on how to apply certain fundamentals of doctrine to lifestyle and practice. For example, the wearing of jewelry is discouraged, but there is a wide spectrum of members who hold differing views on how strictly the church should enforce this teaching. In practice, a member can wear jewelry to church as long as they are able to worship in harmony with the other members who decide not to wear jewelry.

The Adventist teaching against unclean meats is clear enough, but I have yet to see anyone thrown out of church for eating bacon with their eggs. Members who are not “strict” on diet and health do not discourage others from following the churches teachings on health reform. The less strict respect the liberty of more conservative members and refuse to allow the issues to become a matter of personal conflict.

It is hard for me to imagine that a person would become a member of the Adventist church who did not agree in principle with the major doctrinal teachings on the sabbath, the non-immortality of the soul, and the second coming of Jesus. I would discourage any minister from allowing people who do not hold these beliefs into membership. It would be hard for these people to support the Adventist church. However, a person can believe that the Sabbath is the Seventh-day and yet have different views on what it means to keep the Sabbath day holy.

While there is a wide spectrum of Adventists who interpret the fundamental beliefs differently, most Adventists would allow for church discipline against those who blatantly live or teach against the fundamental norms of the church. A member would not last long in fellowship if he or she decided to openly espouse a doctrine that was directly in conflict with a fundamental position.

Historically, there has always been a wide gap between the accepted beliefs of the General Conference and the practice of the individual member’s in the church. Adventists allow for differences of opinion on matters of lifestyle as long as the members acknowledge the church’s teachings and refuse to allow their personal choices to interfere with their ability to live in peace and harmony with other church members.

Then there is the distinction between a lay member of the church and an active leader within the denomination. Those who take leadership positions should hold themselves to the highest standard in regards to the fundamentals. The leaders need to allow for the differences of opinion among the lay people while encouraging spiritual growth that is in harmony with the official teachings of the church as an organization.

To answer the question more directly: Yes. A person needs to acknowledge all 28 Fundamental Beliefs in principle before they are accepted into membership. However, keep in mind that it is up to the individual member how to put these beliefs into practice. All members must allow for differences of opinion while living and worshiping in harmony with other Adventists.