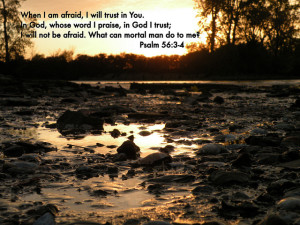 David–the mighty man of God who stood up to the giant Goliath with only a sling-shot and five smooth stones when the rest of the Israelite warriors were in terror of becoming slaves to the Philistines–wrote this verse of scripture during a period of intense anxiety over enemies who were conspiring to destroy him. The verses before and after Psalm 56:3 describe an enemy that was determined to assassinate him for political purposes. They were constantly lurking in the shadows waiting for the perfect moment to kill him–the future King of Israel.

It is not that David did not have faith in God, but he realized his own inability to control a situation that seemed hopeless. The constant political attacks and personal assaults were wearing him down and making him miserable. He was embarrassed at his weakness and spent many nights in tears over the condition of the nation that God would entrust to his care. It appeared to him that he was caught in a situation between political enemies in Israel and the enemies of a foreign land (Unger, 2002, p. 826). There didn’t seem to be any way to escape.

But notice David’s reaction to this problem. He didn’t surrender to his enemies, but he decided to place His life in God’s hands. Even though David had no idea how God would solve the problem, he knew that the God who counted his tears would handle the situation:

“Record my misery; list my tears on your scroll—are they not in your record? Then my enemies will turn back when I call for help. By this I will know that God is for me” (Psalm 56:8-9, NIV).

Instead of letting anxiety and discouragement get the best of Him, David decided to trust God regardless of how things turned out. His logic was that if God wanted him to live then there was absolutely nothing that could destroy him. He proclaimed in bold confidence, “In God I trust and am not afraid. What can man do to me?”

The Life Application Study Bible makes the following statement regarding the theme of Psalm 56: “Trusting in God’s care for us in the midst of fear. When all seems dark, one truth still shines bright: when God is for us, those against us will never succeed” (2005, p.885).

As human beings, we will all experience moments of anxiety and fear. But it is during these moment that we are to acknowledge our human weakness and rely on the power of the almighty God. The Apostle Paul most likely had Psalm 56 in mind when he penned the following words of courage to the early Roman Church, “If God is for us, who can be against us” (Romans 8:31, NIV).

The Great Evangelist C.H. Spurgeon wrote the following declaration that applies to all of those who commit their hearts to Jesus Christ: “I am immortal till my work is done.”

There is absolutely nothing that can stand between us and the will of God for our lives while we are trusting in His wisdom and power. Let us be like David and train our minds to trust God no matter how horrifying the situation may seem to our physical senses.

God delivered David from certain death, and He will do the same for those who trust Him. Even if He allows us to suffer and die for His glory then we can be assured that we have an eternity of blessings in paradise that will never be taken away. Our pain here on earth is temporary, but the rewards of trusting God’s plan for our life are forever.