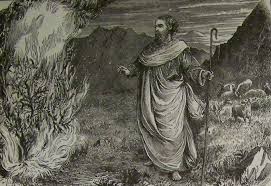 Just as the burning bush of Exodus was a lowly shrub emitting a divine light and power, so Jesus would also be God in the form of a lowly man. Jesus wasn’t only a good man, or a human prophet, Jesus was the Almighty God in human form (Philippians 2: 6-8, NIV):

“Who, being in very nature God, did not consider equality with God something to be used to his own advantage; rather, he made himself nothing by taking the very nature of a servant, being made in human likeness. And being found in appearance as a man, he humbled himself by becoming obedient to death—even death on a cross!”

But wait! There is another I AM statement in the gospels. Jesus has been arrested by the Jews for blasphemy. They bring him before the elders, priests, and scribes of the Sanhedrin and asked Him, “Are you then the Son of God? So he said to them, ‘You rightly say that I AM.’ ”

“Now it happened in the process of time that the king of Egypt died. Then the children of Israel groaned because of the bondage, and they cried out; and their cry came up to God because of the bondage. So God heard their groaning, and God remembered His covenant with Abraham, with Isaac, and with Jacob. And God looked upon the children of Israel, and God acknowledged them” (Exodus 2:23-25, NKJV).

God’s people were in a dark place of physical bondage to the Egyptians who were working them to death. Not only were they living in slavery, but the Egyptians had ordered all of their male babies to be drowned in the river. They had every reason to groan and cry out to God, but they were able to endure this suffering because they had God’s promise to Abraham that they would be delivered and become come a great nation (Genesis 15:13-14)–and God is always faithful to His promises.

God had even given them a time table of 400 years that they would be in bondage to a foreign people. They must have known the time for their salvation was getting near. When the time was right, God remembered what He promised Abraham and acknowledged the cries of His people.

God hadn’t forsaken the Hebrews by allowing them to be slaves in Egypt. In fact, God often allows his servants to endure hardship, but He always has a plan to turn what Satan means for evil into a larger blessing. In the book of Genesis, Joseph had to endure many years of ridicule, slavery, and prison before He became one of the highest ranking leaders in Egypt. God never forgets His people.

There are many times in our lives when we face adversity and hardship. This shouldn’t be a surprise since Jesus warned us:

“I have told you these things, so that in me you may have peace. In this world you will have trouble. But take heart! I have overcome the world” (John 16:33, NIV).

Even though Jesus warned that we would endure hardship, He softened the warning between two promises: (1) We would be given peace of heart, and (2) Jesus would give us the strength to endure. He hadn’t yet gone to the cross, but He was already claiming victory; He had perfect trust in the power of the father that would allow Him to endure the cross of Calvary. In the same way, we may also have the assurance of our salvation through the blood of Jesus.

In the midst of our hardship, we can also know that God hears our groaning and crying out to him. King David knew this when He wrote:

“In my distress I called upon the LORD, and cried unto my God: he heard my voice out of his temple, and my cry came before him, even into his ears” (Psalm 18:6, KJV).

Like the Hebrews, who had endured 400 years of cruel slavery, we can rely on the promises of God to His people. No matter how bad things get, we can know for certain that God is aware of our suffering, that He hears our cries for help, and that He WILL turn all of our adversity into a glorious triumph.

Most mature Bible believing Christians are familiar with 2 Timothy 3:16-

“All Scripture is God-breathed and is useful for teaching, rebuking, correcting and training in righteousness” (NIV).

But who can tell me the verse that comes immediately before this one? Don’t look in your bibles! Can you say it from memory? Here it is:

“and how from infancy you have known the Holy Scriptures, which are able to make you wise for salvation through faith in Christ Jesus” (v. 15).

In many ways verse 15 is the main idea of what Paul is saying: The purpose of Scriptures is to make us WISE FOR SALVATION. All of the teaching, rebuking, correcting and training is to help us have a clear idea of salvation through faith in Jesus Christ. It is not enough to know the scriptures. There are many Bible scholars who miss the point of why the Bible was written. It is essential that the Bible be interpreted in the light that streams from the cross of Christ:

“The sacrifice of Christ as an atonement for sin is the great truth around which all other truths cluster. In order to be rightly understood and appreciated, every truth in the Word of God, from Genesis to Revelation, must be studied in the light that streams from the cross of Calvary. I present before you the great, grand monument of mercy and regeneration, salvation and redemption the Son of God uplifted on the cross. This is to be the foundation of every discourse given by our ministers” (Ellen G. White, Gospel Workers, p. 315).

Each verse of the Bible is like a piece to a very large puzzle. Each verse has its proper place, and when all of the pieces come together we are left with a picture of Jesus wearing the crown of thorns, and with his nail pierced hand He points to the doorway of eternal life: