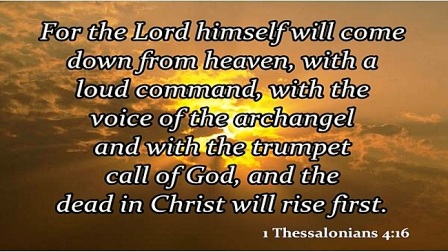 In my last post, I wrote about how the Bible teaches only God is immortal. But this has brought up the question about where people go when they die. Do people go straight to heaven or hell when they die, or do they wait until they are resurrected at the second coming?

The experts have been confused on this teaching for thousands of years. It seems that everyone has their own theory about what happens immediately after a person dies. But the only thing that matters is what the Bible says on the topic.

Let’s take a look at Scripture:

1 Thessalonians 4:16, NIV — “For the Lord himself will come down from heaven, with a loud command, with the voice of the archangel and with the trumpet call of God, and the dead in Christ will rise first.”

Those who still insist that people go straight to heaven when they die will claim that the righteous are taken to heaven directly without their physical bodies, and that they will be united with their bodies at the second coming of Jesus. But there is not enough evidence in scripture to support that view. The most logical explanation is that they cease to exist until they are resurrected. This is why death is equated to sleeping in the New Testament Scriptures.

When a person dies they cease to have any awareness of time in much the same way as a person is not aware of the passage of time when they are sleeping. One thousand years might pass on earth, but when a person is resurrected the passage of time would seem like the blinking of an eye. This interpretation also corresponds to the old testament view of death: “For the living know that they will die, but the dead know nothing;” (Ecclesiastes 9:5, NIV).

Now there is scriptural evidence that certain people have gone to heaven already like Enoch and Elijah who never experienced physical death. The Bible also says that Moses was resurrected shortly after his death. There may be a select few that are in heaven now, both body and soul, but the scripture is clear that most of the dead in Christ are asleep in the graves awaiting the second coming.