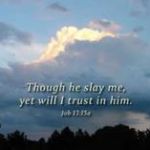 This verse of Holy Scripture is one of the oldest texts in the history of the world. It comes from the book of Job which many believe to be older than the biblical book of Genesis. Not only is it one of the oldest verses of holy scripture, but it is one of the most profound statements when it comes to genuine faith in the one and only true God.

I want people to know that I praise God the most when things are the hardest. It is easy to trust God when things are comfortable, but genuine faith proclaims trust in the mist of hardship and despair.

What do I know about hardship? My parents were separated many times until they were divorced when I was 9 years old. I spent that Christmas in a shelter for abused women with my mother and sister who had been thrown out of the house by my father. Then I lost my father to a car accident when I was 15 years old.

I never had a chance to make any good friends due to going to a different school every year since the 5th grade until my junior year of high school.

My mother remarried when I was 12 years old, but then she and my step-father were thrown out of the church due to his backsliding. He then began drinking heavily and became emotionally abusive.

I attended college for a year, but then dropped out in my first year because of my own financial irresponsibility. But at least I was able to pay for a mission trip to India when I was 18 years old.

I joined the Marine Corps in 1993, but I was separated for health problems during the basic training. I then enlisted again in 1995, graduated basic training, and spent 8 years in the Marine Corps. During that time, I got married and my wife began to have emotional problems due to her past. She claimed she had been raped by some person, but she refused to participate in an investigation.

After the Marine Corps, I had been hired as a Deputy United States Marshal, but I dropped out of the program prior to going to the Federal Law Enforcement Academy over marital problems.

I had the last $500 I had in my bank account stolen from me after my wife and I were separated in Nevada. I had no job, and no way to pay for rent or food. Thankfully, I was able to get a job as a security officer at a community college to avoid living on the streets.

Then I moved to live closer to my parents in Vermont, with my wife–we were trying to make amends–but ended up getting divorced a few years later.

I have been fired from jobs after being placed in situations that I was not properly trained for and then blamed for things going wrong. This has affected my ability to get further employment.

My credit report literally fell apart after I was discharged from the Marine Corps as I was unable to make car payments or pay back loans. This has also affected my ability to get employment due to credit checks.

SO WHEN I TELL YOU THAT I KNOW WHAT IT IS TO SUFFER THEN I MEAN THAT I AM FULLY ACQUAINTED WITH TRIALS AND TRIBULATIONS.

Where was God during this entire time? He was right beside me reminding me that I was still loved and part of His family. The devil might have been attacking me from the day I was born, but that was because I was destined to put a big hole in the kingdom of darkness. Jesus suffered His entire life, and He was God. Who am I to expect any different?

I am shamed to say that much of my suffering was a result of my own doings, and that I have to rely on the mercy of God for anything good that comes my way. But I am confident that God has a plan for my life, and that my ministry is born out of suffering and tribulation.

My faith in God does not depend on the good things in life, but on the ability of God to get me through the impossible. I am not naturally an optimist, but I have seen how God can work miracles.

My life is in His hands, and as long as I have breath in my body and blood in my veins, I will thank God for His love. I have the assurance of salvation in the eternal kingdom of love, and that is my hope.

Though life has been difficult, it hasn’t all been bad. I got through my childhood with a strong faith in God, I have traveled the world, I have many good memories of family and friends, and I have graduated with three college degrees
.
One thing I have learned is that God is able to turn our largest burdens into the biggest blessings. Our heaviest trials become our most celebrated triumphs when we trust God. But we must learn to trust Him in the midst of our hardships. We must decide that even if God slays us then we will submit to His will.

Every ounce of suffering that we endure for Christ will be rewarded in the heavenly kingdom. The pain of this world is temporary, but the pleasures of the heaven are for eternity.